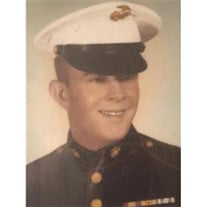 "For I am now ready to be offered, and the time of my departure is at hand: I have fought a good fight, I have finished my course, I have kept the faith." 2 Timothy 4:6-7 Gillis Edward Massie, 71, of Pierpoint, entered into Heaven's gates on May 20, 2017 at Bowers Hospice House after battling a long illness. He was a devoted husband, grandpa, brother, and friend. Gillis was born November 22, 1945 at Glen Rogers and was the son of the late Annie and Frank Massie. He proudly served his country in the United States Marine Corp; he was a retired coal miner after 31 years, and a member of UMWA. He was a faithful servant of God and a proud member of Pierpoint Freewill Baptist Church. Gillis loved attending church and witnessing to others about the grace of God. He enjoyed spending time with his family, working on his Corvette, and spoiling his grandchildren. He never met a stranger and anyone who knew Gill knew how contagious his "good buddy" attitude and smiles were. In his finals days, he kept his family entertained by his sense of humor. In addition to his parents Gillis is also preceded in death by his in-laws, Paris and Louise Graham; his brothers, John and Frank Massie; and his sisters, Zale Daniels, Ellen Marchellio, Edna Kmet, and Peggy Hayworth. Those left to cherish his memory include his wife of 46 years, Vivian (Bodie) Graham Massie of Pierpoint; one son, Rev. Richard Massie and his wife, Janetta of Pierpoint; two daughters, Kimberly Stafford and her husband, Dave of Beckley and Rhonda Coomes and her husband, Michael of Garwood; four grandchildren who were his pride and joy, Tyler Short of Beckley, Alexandria Minnix and her husband, Shane of Princeton, Colten Coomes of Beckley, and Dylan Massie of Pierpoint; two great grandchildren, Brookelynn and Brodie Minnix of Princeton; one brother, Jesse Massie and his wife, Jerri of Mullens; and numerous nieces, nephews, sisters-in-law, brothers-in-law, and friends that loved him dearly. Services will be 12 Noon, Wednesday, May 24, 2017 at Tankersley Funeral Home Chapel, Mullens with his Pastor, Rev. Butch Acord and his son, Rev. Richard Massie officiating. Burial will follow in Sunset Memorial Park, Beckley. Pallbearers will be Dave Stafford, Robbie Graham, Julian Graham, Gene Massie, Colten Coomes, and Dylan Massie. Graveside rites will be conducted by the Wyoming County Honor Guard. The family would like to express their gratitude to the Bower's Hospice House for the quality of care Gill received both in his home and at the facility, a special thank you to Serena and Andrea, his nurses, to the Pierpoint Freewill Baptist Church, Herndon Freewill Baptist Church, and the many family and friends who have surrounded the family with love during their time of need. In lieu of flowers, the family requests donations of sympathy be made to Bowers Hospice House, 454 Cranberry Drive, Beckley, WV 25801. Online condolences may be expressed to the family at www.tankersleyfh.com. The family of Gillis Massie is being cared for by Tankersley Funeral Home, Mullens.

"For I am now ready to be offered, and the time of my departure is at hand: I have fought a good fight, I have finished my course, I have kept the faith." 2 Timothy 4:6-7 Gillis Edward Massie, 71, of Pierpoint, entered into Heaven's gates on... View Obituary & Service Information

The family of Gillis E. Massie created this Life Tributes page to make it easy to share your memories.

&quot;For I am now ready to be offered, and the time of my departure...

Send flowers to the Massie family.