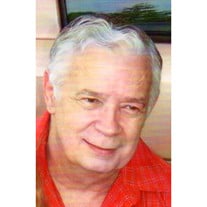 "Greater is he that is in you, than he that is in the world." 1 John 4:4 Gary Cameron Shrewsbury, 68, of Bud went home to be with his Lord and Savior on Sunday, June 12, 2016 at the VA Medical Center following a long illness. Born November 7, 1947 at Bud, he was the son of the late Virgil A. Shrewsbury, Sr. and Jessie (Estes) Shrewsbury. Gary was a faithful member of the Herndon Freewill Baptist Church for 43 years where he dedicated his life to the Lord on October 7, 1973 and served as a Trustee of the church and was a former Sunday School teacher. He was a retired coal miner having last worked for Itmann Coal Company and was a member of UMWA. Gary was a U.S. Army Veteran where he was a Combat Veteran of the Vietnam War. In addition to his parents he is also preceded in death by one brother, Jesse Shrewsbury; and father and mother-in-law, Giles and Betty McKinney. Those left to cherish his memory include his wife of 41 years, Gloria Shrewsbury of Bud; two daughters, Andrea Saunders and her husband, Chris of Mullens and Allison Norris her husband, Todd of Itmann; and one son, Cameron Shrewsbury and his wife, Becky of Bud. Gary was a proud grandfather and enjoyed spending time with his grandchildren: Emily and Sarah Saunders, Audrey and Lora Beth Steele, and Micah Norris; four step grandchildren, Krista and Kelsa Hughes, Tyler Bragg, and Kaden Norris; one brother, Virgil A. Shrewsbury, Jr. and his wife, Lila of Bud; and one sister, Carolyn. Services will be 11:00 A.M. Wednesday, June 15, 2016 at Herndon Freewill Baptist Church, Herndon with Rev. William O. Tolliver officiating. Burial will follow in Blue Ridge Memorial Gardens, Beckley. Friends may call from 6:00 P.M. to 8:00 P.M. Tuesday, June 14, 2016 at Herndon Freewill Baptist Church, Herndon and one hour prior to services Wednesday at the church. Military graveside rites will be conducted by the Wyoming County Honor Guard. Family and friends will serve as pallbearers. Online condolences may be expressed to the family at www.tankersleyfh.com. The family of Gary Shrewsbury is being cared for by Tankersley Funeral Home, Mullens.

"Greater is he that is in you, than he that is in the world." 1 John 4:4 Gary Cameron Shrewsbury, 68, of Bud went home to be with his Lord and Savior on Sunday, June 12, 2016 at the VA Medical Center following a long illness. Born November... View Obituary & Service Information

The family of Gary C. Shrewsbury created this Life Tributes page to make it easy to share your memories.