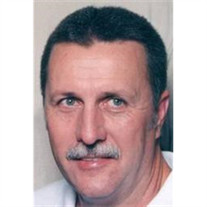 Gary Donald Rhodes, Sr., 60, of Pineville, went home to be with the Lord on Tuesday, April 5, 2011 in a Beckley hospital following a sudden illness. Born February 1, 1951 at Wyco, he was the son of the late George Raymond and Marjorie Neely Rhodes. Gary was a gas measurement specialist at Dominion Transmission with 36 years of service and was a member of Welton Bible Chapel where he served as song leader, speaker, and elder. He served his country in the U.S. Air Force during the Vietnam Era, obtaining the rank of Sergeant. In addition to his parents, he was also preceded in death by his father-in-law, Robert W. Thomas, Sr. Those left to cherish his memory include his wife of 30 years, Lydia Beth Rhodes; two sons, Gary Donald Rhodes, Jr. and his wife, Rebecca A., of Escondido, CA and Adam Christopher Rhodes of Huntington; a sister, Cheryl Bullington of Mullens; a brother, Gene R. Rhodes and his wife, Shirley, of Rittman, OH; two sisters-in-law, Debbie Ingram of Atlanta, GA and Cathy Morris and her husband, Daniel K., of Aurora, TX; a brother-in-law, Robert W. Thomas, Jr. and his wife, Christine B., of Harmony, PA; seven nephews, Tyler Bulllington, Eric and Timothy Rhodes, Andrew M. and Christopher A. Thomas, Jarrod K. Morris, and Sean Mulzet; and four nieces, Lori Rhodes, Rachel J. Anderson, Danielle E. Morris, and Melissa Joswiak. Services will be 1:00 p.m. Saturday, April 9, 2011 at the Welton Bible Chapel, Allen Junction, with David Pollock officiating. Burial will follow in Blue Ridge Memorial Gardens, Beckley. Friends may call from 11:00 a.m. until time of services Saturday at the church. Family and friends will serve as pallbearers. Military graveside honors will be conducted by Oak Hill VFW Post #3110. In lieu of flowers, the family would appreciate donations of sympathy be made to the Welton Bible Chapel P.O. Box 834, Mullens, WV 25882.

Gary Donald Rhodes, Sr., 60, of Pineville, went home to be with the Lord on Tuesday, April 5, 2011 in a Beckley hospital following a sudden illness. Born February 1, 1951 at Wyco, he was the son of the late George Raymond and Marjorie Neely... View Obituary & Service Information

The family of Gary D. Rhodes, Sr. created this Life Tributes page to make it easy to share your memories.