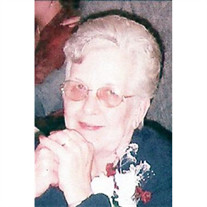 Francis Pauline "Polly" Scott, 78, of Bud, went home to be with the Lord on Thursday, December 3, 2015 at Bowers Hospice House, Beckley following a long illness. Born March 26, 1937 at Ellison Ridge, Summers County, she was the daughter of the late Ibra Guy and Willie Eden (Bolen) Cox. Polly was a homemaker, 22 year resident of Bud coming from Summers County, and was a member of the New Hope Old Regular Baptist Church, Bud Mtn. In her leisure she enjoyed gardening and canning. In addition to her parents she is also preceded in death by her husband, John Franklin Scott; one grandson, Aaron Scott; and one brother, Ray Dean Cox. Those left to cherish her memory include her two sons, Steve Scott and his wife, Terri of Oceana and Johnny Scott and his wife, Clara of Bud; grandchildren, Melissa and Kenneth Birchfield of Lashmeet, Andrew and Ann-Marie Scott of Princeton, and Lindsay Scott of Princeton; one great grandchild, Gabriella Brooke Scott and another great grandchild due in June; and one brother, Ibra Harold Cox and his wife, Loretta of Summers County. Services will be 11:00 A.M., Monday, December 7, 2015 at Tankersley Funeral Home Chapel with Elder Vern Blankenship and Rev. Ricky Pugalee officiating. Friends may call one hour prior to services Monday at the funeral home. Committal services and burial will follow at 2:30 P.M. at the Mt. Alexander Cemetery, Sarton Mtn., Monroe County. Those wishes attend the committal service are asked to meet at the cemetery. Family and friends will serve as pallbearers. Online condolences may be expressed to the family at www.tankersleyfh.com. The family of Francis "Polly" Scott is being cared for by Tankersley Funeral Home, Mullens.

Francis Pauline "Polly" Scott, 78, of Bud, went home to be with the Lord on Thursday, December 3, 2015 at Bowers Hospice House, Beckley following a long illness. Born March 26, 1937 at Ellison Ridge, Summers County, she was the daughter of the... View Obituary & Service Information

The family of Francis P. "Polly" Scott created this Life Tributes page to make it easy to share your memories.

Send flowers to the Scott family.