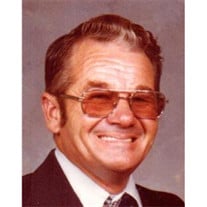 Everett Wayne Farmer, 85, of Itmann, passed away on Friday, March 3, 2017 at his residence following a long illness. Born July 22, 1931 at Grayson County, Virginia he was the son of the late William Roby Farmer and Della Coldiron Farmer Walker. Everett was a former coalminer last working for Consolidated Coal in Itmann with 40 years of service, member of UMWA, and a member of the Itmann United Methodist Church. In his leisure he enjoyed fishing, hunting, riding motorcycles, and spending time with his family at their camp at Montcove Lake. In addition to his parents he is also preceded in death by two brothers, Blane and Raymond; one sister, Marie; and several half brothers and sisters. Those left to cherish his memory include his wife, Gertrude Mae Farmer; one daughter, Shirley Weaver and her husband, Charles of Bluefield, WV and Florida; three sons, Everett Wayne Farmer, Jr. and his wife, Dolly of Mullens, Ray Farmer and his wife, Kim of Beckley, and Bobby Farmer and his wife, Linda of Pierpoint; two half-sisters, Ruby McCroskey of Rocky Gap and Opal White of Page, WV; five grandchildren; 17 great grandchildren; and special friends, Ramona Cordell and the late Curtis Cordell and Joe Murphy. Services will be 12 Noon, Wednesday, March 8, 2017 at the Itmann United Methodist Church, Itmann with Pastor Jason Stewart and Pastor Larry Dyer officiating. Burial will follow in Roselawn Memorial Gardens, Princeton. Friends may call from 6:00 P.M. to 8:00 P.M. Tuesday, March 7, 2017 at Tankersley Funeral Home, Mullens and one hour prior to services Wednesday at the church. Family will serve as pallbearers. The family would like to give a special thanks to their extended family, Polly, Donna, Christy, Glenna, and Trina. Online condolences may be expressed to the family at www.tankersleyfh.com The family of Everett Farmer is being cared for by Tankersley Funeral Home, Mullens.

Everett Wayne Farmer, 85, of Itmann, passed away on Friday, March 3, 2017 at his residence following a long illness. Born July 22, 1931 at Grayson County, Virginia he was the son of the late William Roby Farmer and Della Coldiron Farmer Walker.... View Obituary & Service Information

The family of Everett W. Farmer created this Life Tributes page to make it easy to share your memories.

Everett Wayne Farmer, 85, of Itmann, passed away on Friday, March...

Send flowers to the Farmer family.