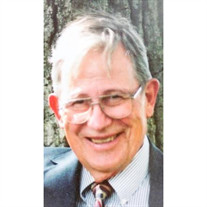 Ernest (Tiny) Musser of Mullens, West Virginia passed away on January 17, 2017, at the age of 94, at the Veterans Administration Medical Center in Beckley, West Virginia. He was a beloved husband, father, grandfather, son, brother, uncle, friend and neighbor. Born on September 4, 1922, in Cedar Springs, Virginia, he was the second of nine children born to Vernon Musser and Mabel (Rosenbaum) Musser. Tiny got his nickname from his older brother, Jesse, who called him the "tiny baby." Tiny's family moved to Mullens when he was a young boy. He graduated from Mullens High School in 1941. After spending time working for his cousin in Montana, he joined the U. S. Army to defend his country in World War II in Europe. When the war was over, he came home to Mullens and married Nancy (Minnick) in 1951. They were married for 65 years and had two daughters, Christine, wife of Gordon Sheetz of Annville, Pennsylvania and Rebecca, wife of Mark Winfrey of Villa Rica, Georgia. Tiny was a Christian and a long-time member and deacon of the Highland Avenue Baptist Church in Mullens. He retired from the Norfolk and Western Railway. He enjoyed spending time around horses and working on guns, was known for repairing guns and made many friends in that way. He is predeceased by his parents, his brothers Jesse and Lindy Musser and sister Willadean Snyder and survived by his wife, daughters, grandsons Jeremy Smith and wife Kristen, Nathan Fichthorn and wife Stacie and Matthew Winfrey and wife Courtney, great-grandchildren Blake Fichthorn, Rylie Smith and Luke Winfrey, sister Virginia Powell, brothers Paul, Jim, John and Pete Musser, as well as many nieces and nephews. Services will be 11:00 A.M. Saturday, January 21, 2017 at the Highland Avenue Baptist Church, Mullens with Rev. Lewis Arnold officiating. Burial will follow in Roselawn Memorial Gardens, Princeton. Friends may call one hour prior to services Saturday at the church. Family and friends will serve as pallbearers. For those considering an expression of sympathy, the family requests donations be made to the Highland Avenue Baptist Church, 317 Highland Avenue, Mullens, WV 25882. Online condolences may be expressed to the family at www.tankersleyfh.com. The family of Ernest Musser is being cared for by Tankersley Funeral Home, Mullens.

Ernest (Tiny) Musser of Mullens, West Virginia passed away on January 17, 2017, at the age of 94, at the Veterans Administration Medical Center in Beckley, West Virginia. He was a beloved husband, father, grandfather, son, brother, uncle, friend... View Obituary & Service Information

The family of Ernest "Tiny" Musser created this Life Tributes page to make it easy to share your memories.

Ernest (Tiny) Musser of Mullens, West Virginia passed away on...

Send flowers to the Musser family.