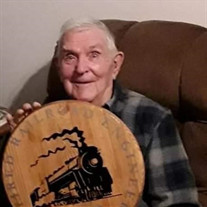 The Lord is my shepherd; I shall not want. He maketh me to lie down in green pastures: he leadeth me beside the still waters.He restoreth my soul: he leadeth me in the paths of righteousness for his name's sake. Yea, though I walk through the valley of the shadow of death, I will fear no evil: for thou art with me; thy rod and thy staff they comfort me. Psalm 23:1-4 Ernest Lee Martin, 98, of Mullens, passed away on Thursday, August 5, 2021 in a Roanoke hospital following a short illness surrounded by his family. Born January 29, 1923 in Princeton, he was the son of the late Lawson and Lillie (Foley) Martin. Mr. Martin attended school in Princeton. He was a proud U.S. Navy Veteran having served during WWII from 1942-1945 where he served aboard the USS Briareus Navy Repair Ship in the Pacific area for two of those years. He was a former employee of the Virginian, Norfolk, Western, and Norfolk & Southern Railroads retiring as an Engineer after 43 years of service. He attended the Mullens Church of God and loved spending time with his children, grandchildren, and was the last survivor of his immediate family. In addition to his parents he is also preceded in death by his wife, Mary Frances (Hickman) Martin; a son, Danny Martin; daughter-in-law, Janice Martin; three brothers, Fred, Cecil, and Basil Martin; seven sisters, Judy Jewel, Dovie, Ivy, and Pansy Martin, Gatha Woolfolk, Frances Atkinson, and Virginia Smith. Those left to cherish his memory include one daughter, Brenda Thorn of Mullens; one son, Gary Martin and his wife, Donna of Mullens; six grandchildren, Danny Martin, Jr. and his wife, Jenny Ann, Christy Jones, Kyle Martin and his wife, Kayla, Nicholas Martin and his wife, Kameron, Michael Seaton and his wife, Christy, and Jimmy Seaton; twelve great grandchildren; two great great grandchildren; and a host of nieces and nephews. Services will be 11:00 A.M. Tuesday, August 10, 2021 at Tankersley Funeral Home Chapel with Pastor John Morgan officiating. Burial will follow in Roselawn Memorial Gardens, Princeton. Friends may call one hour prior to services Tuesday at the funeral home. Pallbearers will be Kyleigh Martin, Danny, Kyle, and Nicholas Martin, and Jimmy Seaton. Military graveside rites will be conducted by the Wyoming County Honor Guard. Online condolences maybe expressed to the family at www.tankersleyfh.com. The family of Ernest Martin is being cared for by Tankersley Funeral Home, Mullens.

The Lord is my shepherd; I shall not want. He maketh me to lie down in green pastures: he leadeth me beside the still waters.He restoreth my soul: he leadeth me in the paths of righteousness for his name's sake. Yea, though I walk through the... View Obituary & Service Information

The family of Ernest Lee Martin created this Life Tributes page to make it easy to share your memories.

The Lord is my shepherd; I shall not want. He maketh me to lie...

Send flowers to the Martin family.