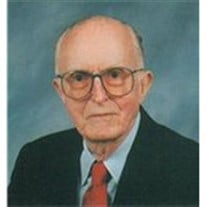 E. Claude Cook, local business man and long time resident of Mullens, died on Tuesday, August 18, 2009 at his residence of natural causes. He was 94. Ewell Claude Cook was born on October 14, 1914 in Baileysville, the son of the late Jacob E. Cook and Elizabeth Stone Cook. After Jacob's death in 1925, Mrs. Cook moved she and Claude to Mullens, where they settled with her sister, Maude Stone. Elizabeth went to work for Mrs. Stone at what would become the Mullens Dollar Store, where she remained for nearly 50 years. Claude graduated with honors from Mullens High School in 1931, then enrolled at the University of Illinois (Urbana) to study architecture. He returned to manage the Dollar Store until enlisting in the U.S. Army at the start of World War II. After serving four years at Camp Perry, Ohio, Claude resumed his duties at the Dollar Store, helping to expand the business into what would eventually be rechristened "Stone and Cook" in honor of his hard work and dedication. Over the years Claude became a pillar of the Mullens community. He was a long standing member of the Mullens Chamber of Commerce and was twice elected president (at the time it's youngest); he was both a Rotarian and Lion, helping to raise money for numerous civic and youth projects; he served on the Board of Directors of the Wyoming County Library system; and he was an active member (for more than 80 years) of the Mullens United Methodist Church. Both the church and the Mullens branch of the public library utilized Claude's architectural training in their building projects; and his more than seven decades as an avid photographer helped chronicle the growth and development of Wyoming County. Claude was proceeded in death by his mother in 1976 and his aunt Maude in 1980, but leaves behind cousins, Mary Ann Dixon of Canton, OH; Joyce Galloway of Williamsburg, VA; Barbara Harmon Price of Beckley; Jim Stone and family of Marietta, OH; Tom Stone of Summerton, SC; close friends, Gary and Betty Runion, of Mullens; and caregivers, Sue and Will Peterson, of New Richmond and Mary Burks of Cabin Creek. Services will be 12 Noon Friday, August 21, 2009 at the Mullens United Methodist Church with the Rev. Gerald Roberts officiating. Entombment will follow at Sunset Memorial Park Mausoleum, Beckley. Friends may call one hour prior to services Friday at the church. United Methodist Men will serve as pallbearers. In lieu of flowers, Claude has requested the donations be made to the Mullens Public Library, 102 Fourth Street, Mullens, WV 25882.

E. Claude Cook, local business man and long time resident of Mullens, died on Tuesday, August 18, 2009 at his residence of natural causes. He was 94. Ewell Claude Cook was born on October 14, 1914 in Baileysville, the son of the late Jacob E.... View Obituary & Service Information

The family of E. Claude Cook created this Life Tributes page to make it easy to share your memories.

Send flowers to the Cook family.