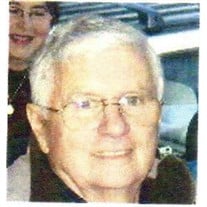 Darrell Edward Pauley was born January 7, 1928 in Mullens, WV and passed away May 5, 2016 at the Bowers Hospice House in Beckley, WV. He was preceded in death by his father, William Mercer Pauley; his mother, Nannie Blanche (Blankenship) Pauley; six brothers (Albert, Howard, Luther Clifton, Kelly, Robert, and Gerald); and one sister, Thelma. Darrell is survived by his wife of 66 years, Reda L. Pauley; son Darrell R. Pauley and his wife Barbara; son Jeffrey V. Pauley and his wife Lisa; grandchildren Lauren Marchetti and her husband Dan, Jamie Ruehlen and her husband Chad, Eric Pauley and his wife Amy, and Dustin Pauley; great grandchildren Julia Marchetti, Corbin Ruehlen, Katelyn Marchetti, and Elise Ruehlen; and numerous nephews and nieces. Darrell's life was centered around his family. After graduating from Mullens High School in 1946 he worked for the family plumbing and heating business in Mullens, where his six brothers and sister also lived. He went on to work for Mullens Grocery Company for 15 years. Sunday afternoons would find much of his family at his parents' home, enjoying dinner and lively front porch conversation about politics and sports. Darrell and Reda raised their sons in Mullens until 1969 when the family moved to Longmont, Colorado. While in Colorado he worked for the Nuclear Regulatory Commission at the Rocky Flats nuclear plant near Denver. Two brothers and his sister also relocated to Colorado, continuing the strong family connection. After retirement, Darrell and Reda returned to their native Mullens in 2000 to enjoy a slower pace of life and to renew old friendships. Darrell was a generous man, always giving his time and energy to friends in need of his help. Even as his health began to deteriorate, he found it difficult to say no to friends in need. He served on the Board of Directors of the Wyoming County Council on Aging and was very supportive of the Council's mission. He especially enjoyed spending time with friends and interacting with Council staff during the Council's daily luncheons and special events. Darrell was known for his wit, clever saying and stories, and his high energy. He loved sports (especially football and the Denver Broncos), traveling, and working outdoors. But the loves of his life were his wife, sons, daughters-in-law, grandchildren and their spouses, and great grandchildren, all of whom he adored. His life and his love of family will sustain the family now and into the future. He will be missed greatly by all whose lives he touched. The family wishes to thank the many people at the Wyoming County Council on Aging and Hospice of Southern West Virginia who contributed to his care during his illness. Their support has been an invaluable source of comfort. A special thanks goes to Rosie Norman and Brian Pruett. Pallbearers are Eric Pauley, Dustin Pauley, Dan Marchetti, Darry Snuffer, Isaac Snuffer, Jacob Snuffer, and Chad Ruehlen. Services will be 11:00 A.M. Friday, May 13, 2016 at Tankersley Funeral Home Chapel, Mullens with Rev. Lewis Arnold officiating. Burial will follow in Blue Ridge Memorial Gardens, Beckley. Friends may call from 6:00 P.M. to 8:00 P.M. Thursday, May 12, 2016 at Tankersley Funeral Home and one hour prior to services Friday at the funeral home. In lieu of flowers, the family asks that donations be made in Darrell's memory to the Wyoming County Council on Aging (P.O. Box 458, Mullens, WV 25882) and/or Hospice of Southern West Virginia (P.O. Box 1472, Beckley, WV 25802). Online condolences may be expressed to the family at www.tankersleyfh.com. The family of Darrell Pauley is being cared for by Tankersley Funeral Home, Mullens.

Darrell Edward Pauley was born January 7, 1928 in Mullens, WV and passed away May 5, 2016 at the Bowers Hospice House in Beckley, WV. He was preceded in death by his father, William Mercer Pauley; his mother, Nannie Blanche (Blankenship) Pauley;... View Obituary & Service Information

The family of Darrell E. Pauley created this Life Tributes page to make it easy to share your memories.

Send flowers to the Pauley family.