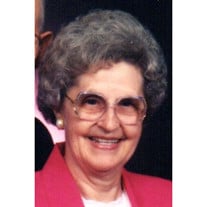 Daisy (Bessie) Irene Simpson Flaim, 88, of Mullens, peacefully entered into Heavenly rest Friday, January 27, 2017. Born July 29, 1928, at Bud, she was the daughter of the late Joseph Simpson and Charlotte Belcher Simpson Rowe. She attended the First Church of God in Mullens where she sang in the choir, taught Sunday school, and served on the church board. She graduated from Princeton High School in 1947 and was a former employee of Maidenform in Princeton. In addition to her parents, she was preceded in death by her husband, Guido Ernest Flaim in 2016; a step-father, Rev. A.W. (Alfred) Rowe, three brothers, Levi Simpson, John Harrison Simpson, and infant, Guy Rowe; and seven sisters, Lottie Rowe, Annie McKinney, Grace Massey, Jennie Sizemore, Ruby Hess, Sadie Chandler, and Erma Lane. Survivors include one son, Timothy Flaim and his wife, Cheryl; two daughters, Debra Baker and her husband, Mark, and Charlotte Lusk and her husband, Gregory; five grandchildren, Christopher Bushong, Michael Baker, Jennifer Spencer, Brian Lusk, and Amy Lusk; three great grandchildren, Rowen Bushong, Madison Spencer, and Jacob Spencer; and one sister, Zola Trivett and her husband, Mark. A Celebration of Life will be at 12 Noon, Saturday, February 4, 2017 at the First Church of God in Mullens with Pastor Tony Bailey officiating. The family will receive friends from 11a.m. until time of service at the church. Burial will follow in Roselawn Memorial Gardens, Princeton. Family and friends will serve as pallbearers. The family wishes to express their heartfelt appreciation to Hospice of Southern West Virginia, Council on Aging, and also the caregivers: Crystal Hypes, Mona Owens, Linda Hutton, Sandra Belcher, Sharon Lafferty, and Pam Carter. In lieu of flowers, memorial contributions may be made to the First Church of God, 940 Guyandotte Avenue, Mullens, WV 25882 or to Hospice of Southern West Virginia. Online condolences may be expressed to the family at www.tankersleyfh.com. The family of Daisy Flaim is being cared for by Tankersley Funeral Home, Mullens.

The family of Daisy (Bessie) I. Flaim created this Life Tributes page to make it easy to share your memories.

Send flowers to the Flaim family.