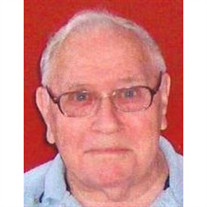 Clifton Erie "Buck" Meadows, 90, of Mullens, passed away Tuesday, November 22, 2011 in a Beckley hospital following a long illness. Born January 20, 1921 at Stotesbury, he was the son of the late Jacob and Cora (Jennings) Meadows. Buck was a former coal miner with 40 years of service, a member of UMWA, and was a member of the Mullens Wesleyan Church. Buck served his country as a veteran of the U.S. Army and the U.S. Navy. In addition to his parents, he was also preceded in death by his first wife, Phyllis Meadows; two sisters, Velva Alma Thornton and Lois Meadows; a brother, Mason Meadows; son-in-law, John Smith; and three favorite brothers-in-law, Ralph Payne, Rex Falvo, and Earl Thornton. Those left to cherish his memory include his wife, Janet Blankenship Meadows; a daughter, Billie Karen Smith of Genoa; two sons, Dale Meadows and his wife, Cindy, of Leland, NC and Michael Meadows of Beckley; five granddaughters, Krissi, Angie, Cortney, Lori, and Donna; one grandson, Christopher; two step-daughters, Sandy Puckett and her husband, Gary, of Beckley and Lisa Lambert and her husband, Keith, of NC and their son, Levi Cooper Lambert; a step-son, Donald Blankenship of Stephenson; and three sisters, Charlotte Johnson and her husband, Gene, of Amigo, Nawawsa "Tootsie" Falvo of Roderfield, and Gloria Payne of Beckley. Services will be 12 Noon, Friday, November 25, 2011 at the Tankersley Funeral Home Chapel, Mullens with Rev. Gilbert Dodson officiating. Burial will follow at Blue Ridge Memorial Gardens, Beckley. Friends may call one hour prior to services Friday at the funeral home. Family and friends will serve as pallbearers.

Clifton Erie "Buck" Meadows, 90, of Mullens, passed away Tuesday, November 22, 2011 in a Beckley hospital following a long illness. Born January 20, 1921 at Stotesbury, he was the son of the late Jacob and Cora (Jennings) Meadows. Buck was... View Obituary & Service Information

The family of Clifton E. Meadows created this Life Tributes page to make it easy to share your memories.

Send flowers to the Meadows family.