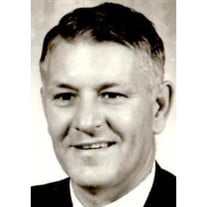 Clifford C. "Sonnie" Phillips, Jr., 87, died peacefully at home surrounded by his family on October 3, 2012 after a long illness. Born April 6, 1925 in Pierpoint, WV, he was the son of the late Clifford C. Phillips, Sr. and Evelyn Murphree Phillips. He was preceded in death by a grandson, Jarrod Lee Smith. Those left to cherish his memory are his wife of 61 years, Betty Jo Wickline Phillips and daughters, Sunny Suzann Bell and husband, Terry, and Terri Lea Smith and husband, Barry, all of Mullens. His grandchildren are Jamie Lusk and wife, Ashley, Cassidy Smith and Taylor Smith, all of Mullens and Jeremy Smith and wife, Kristen, of Kingsport, TN. Sonnie's great-grandsons are Alec Lusk and Lincoln Lusk, both of Mullens. His brother is Richard M. Phillips and wife, Diane, of Jacksonville, AL and their children Debi, Rick, Edward, Rachel, and Brenden. Sonnie's nephew is Mike Witt and wife, Kelly, of Mullens and son Ian Witt of Mullens. Sonnie graduated from Mullens High School in 1946 where he played football, basketball and baseball. His education included a BS Degree in Education from Concord College in 1950 where he was a member of the football and baseball teams. He earned a Masters degree in Education Administration from West Virginia University in 1951. He later received a Driver's Education Certification from Old Dominion University. Sonnie served his country in the US Navy during WWII from 1943-1946 and later as a 1st Lieutenant in the US Air Force Reserves. Mr. Phillips touched the lives of many students in Wyoming County and the state of WV serving as counselor and instructor for 30 years at the WV Mountaineer Boys State. He also served as a teacher from 1951-1972 at Glen Rogers, Pineville, and Mullens High Schools. He was principal at Mullens High School from 1972-1988. During his adult life other occupations included serving as a counselor at the WV Rehabilitation Service, manager at Sears Roebuck and Co., Itmann Coal Company tipple employee, and Second Baseman for the Chicago Cubs Class C Baseball Team. Sonnie received numerous civic awards including the Mullens High School Athletic Hall of Fame, City of Mullens Male Citizen of the Year, Lions Club Man of the Year, Wyoming East Community Spirit Award, and Wyoming East Communities Outstanding Citizens Award. Sonnie's community service included Mayor of Mullens from 1972-1976 where he was instrumental in the building of the Mullens City Swimming Pool, Mullens City Hall, and Route 54 Bypass recently renamed the CC "Sonnie" Phillips Bypass. He also served as the Wyoming County Legislative Chairman for the Wyoming County Retired School Employees. Mr. Phillips was a member of the Mullens Fire Department and the organizing committees for Mullens Little League and Babe Ruth Baseball, in addition to, Midget League Football. Other service included: Board of Directors for American Red Cross, Integrated Resources, Wyoming County Health Department, King Coal Highway, Wyoming County Convention and Visitor's Bureau, Wyoming County Library, and Wyoming County Council on Aging. As an active member of the Board of Advisors of Southern WV Community and Technical College, Mr. Phillips continued to touch the lives of many students. His membership in civic clubs included: American Legion, Mullens Lions Club, Mullens Moose Lodge, Mullens Masonic Lodge, and VFW. Sonnie was an active member of the First Presbyterian Church of Mullens, serving God as an elder at his church and volunteering his time and talents to meet the many needs of his church and community. His love for students and commitment to athletics was again personified in his role as an athletic official. Officiating football, basketball, and baseball games at the college, high school, and community levels, allowed Sonnie to enrich the lives of many. His tutaledge as a head basketball coach at Glen Rogers and Mullens High Schools inspired many athletes to live a honest and productive lives. He further showed his love for students by faithfully attending the WV State Boys High School Basketball Tournament for 62 years. At the age of 85, enjoying what he loved, Sonnie suffered a major stroke after the final game of the 2011 state basketball tournament. The love Sonnie gave was later returned as witnessed by the devotion, kindness, and love given by his caretakers, Kathy Webb and WV Hospice Staff. The family wishes to thank all who have cared and supported them during this time of loss. A celebration of Sonnie's life will be 1 p.m. Sunday, October 7, 2012 at the First Presbyterian Church of Mullens with Rev. Tracy French officiating. Entombment will follow in Blue Ridge Memorial Gardens Mausoleum Hope. Friends may call on Saturday from 6-9 p.m. at the The First Presbyterian Church of Mullens and one hour prior to services Sunday at the church. Military honors will be conducted by the Oak Hill VFW Post 3110. Masonic rites will be conducted by the Mullens Masonic Lodge #151 A.F. & A. M. who will also serve as pallbearers. The Mullens Fire Department will participate at the entombment with a fly over by Health Net. Arrangements have been entrusted to the Tankersley Funeral Home of Mullens.

Clifford C. "Sonnie" Phillips, Jr., 87, died peacefully at home surrounded by his family on October 3, 2012 after a long illness. Born April 6, 1925 in Pierpoint, WV, he was the son of the late Clifford C. Phillips, Sr. and Evelyn Murphree Phillips.... View Obituary & Service Information

The family of Clifford C. Phillips created this Life Tributes page to make it easy to share your memories.

Send flowers to the Phillips family.