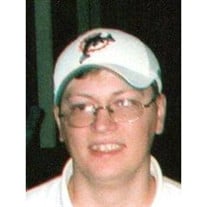 Christopher Henry Short, 35, of Surveyor, formerly of Ravencliff, passed away on Sunday, February 19, 2012 in a Beckley hospital. Born August 24, 1976, at Mullens, he was the son of William Henry and Novella (Bailey) Short of Surveyor. Chris was a resident of Wyoming County for most of his life, was a graduate of Pineville High School, was a registered nurse having graduated from WVU School of Nursing, and was Baptist by faith. In his leisure he enjoyed fishing, mountain biking, feeding the deer in his back yard, playing video games, spending time on his computer and sports; was an avid Miami Dolphin fan, enjoyed pro wrestling where he was a referee, and enjoyed spending time with his many friends and family. Chris was preceded in death by his paternal grandparents, John and Norsie Short; and maternal grandfather, Marvin Bailey. Those left to cherish his memory include his loving and devoted parents, William and Novella Short of Surveyor; a daughter, Jessilynn Marie Myers of Rainelle and her mother, Amy Myers, who is a very special friend of Chris and his family; a sister, Misty Short, of New Richmond; two brothers, Michael Short, of Glen Daniel and B.J. Short and his wife, Brenda, of Layland; maternal grandmother, Violet Bailey, of Glen Rogers; a niece, Makaylee Price, of New Richmond; and a niece who is expected to arrive within a month; his wife, Mary Short, of Beckley; and a host of family and friends. Services will be 1:00 P.M. Thursday, February 23, 2012 at the Pinegrove Missionary Baptist Church, Ravencliff with Pastor Dewayne Hurd, Rev. Mike Tilley, and Rev. Bernard Brooks officiating. Burial will follow in the Pinegrove Church Cemetery, Ravencliff. Friends may call from 11:00 A.M. until time of services Thursday at the church. Pallbearers will be Michael Short, B.J. Short, Randy Hicks, Greg Fortner, Kevin Fortner, Tommy Mosley, and Matt Tolliver. For those considering an expression of sympathy the family requests contributions be made to help defray unexpected expenses to Tankersley Funeral Home, 102 Moran Avenue, Mullens, WV 25882. Arrangements have been entrusted to the Tankersley Funeral Home, Mullens, WV.

Christopher Henry Short, 35, of Surveyor, formerly of Ravencliff, passed away on Sunday, February 19, 2012 in a Beckley hospital. Born August 24, 1976, at Mullens, he was the son of William Henry and Novella (Bailey) Short of Surveyor. Chris... View Obituary & Service Information

The family of Christopher H. Short created this Life Tributes page to make it easy to share your memories.

Send flowers to the Short family.