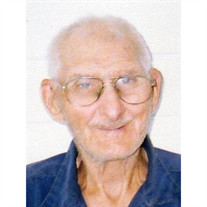 Charles Henry Hubbard, 89, of Jacksonville, NC formerly of Matoaka and Amigo passed away on Monday, February 17, 2014 at Onslow Memorial Hospital, Jacksonville, NC following a short illness. Born July 10, 1924 at Bramwell, he was the son of the late George and Louise Stahl Hubbard. Charles was the last survivor of his immediate family and was a former coal miner. In his leisure he enjoyed collecting and selling scrap metal, working jigsaw puzzles, playing cards, and fishing. He especially loved playing with his great-great niece and nephew, Sky (Mousie) and Oscar (Rat). In addition to his parents he is also preceded in death by 18 brothers and sisters. Those left to cherish his memory include several nieces and nephews; including a special nephew and his wife, Eric and Tammy Cox of Matoaka whom he lived with for several years, before moving to Amigo with his brother, Lonnie Hubbard, Sr. There he was cared for by a very special niece and her husband, Connie and Ray O'Neal who took really good care of him. He moved with them to Jacksonville, NC at the end of August. Graveside services will be 12 Noon, Friday, February 21, 2014 at Roselawn Memorial Gardens Mausoleum, Princeton with Pastor Curtis Honaker officiating. Burial will follow in Roselawn Memorial Gardens. Those wishing to attend the graveside service are asked to meet at the cemetery. Family and friends will serve as pallbearers. For those considering an expression of sympathy the family requests donations be made to help defray unexpected expenses to Tankersley Funeral Home 102 Moran Avenue Mullens, WV 25882. Online condolences may be expressed to the family at www.tankersleyfh.com The family of Charles Hubbard is being cared for by Tankersley Funeral Home, Mullens.

Charles Henry Hubbard, 89, of Jacksonville, NC formerly of Matoaka and Amigo passed away on Monday, February 17, 2014 at Onslow Memorial Hospital, Jacksonville, NC following a short illness. Born July 10, 1924 at Bramwell, he was the son of... View Obituary & Service Information

The family of Charles H Hubbard created this Life Tributes page to make it easy to share your memories.

Send flowers to the Hubbard family.