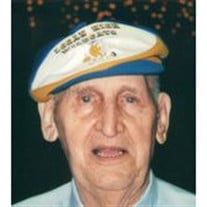 Buford E. "Bud" Hypes of Mullens, died Wednesday, January 13, 2010, at the Princeton Community Hospital following a short illness. Bud was born October 13, 1917, in Newport, Virginia, the son of the late Buford E. Hypes, Sr. and Annie Evelyn Hypes. Bud graduated from Mullens High School in 1935. He is survived by his four sisters, Nelva H. Webster, Maude Canterbury, Alice Ann and Betty Jo Hypes and one brother, Pete P. Hypes, all of Mullens. He is also survived by one brother-in-law, Henry Canterbury, and one sister-in-law, Rachel Hypes. Nieces include Trudy Blackwell (Bucky), Tammy McKinney (Clifford), Elizabeth Hypes and Bertie Arellanos (Coco). Nephews include Dr. Samuel E. Webster, Andrew Canterbury, Petie Hypes, and Derrick Hypes (Joanna). Special great nieces and nephews include Clint Houck, Audra and Mark Blackwell, and Amber and Blaine McKinney. Bud is also survived by his oldest friend, Bill Farmer, of New Smyrna, FL. Bud, also known as the "Tiger", was a world champion nine ball player, winning his first pool tournament at age sixteen. He went all over the country as a representative for Brunswick. During his travels, he played Minnesota Fats and won every game. At one time Bud made 465 straight balls when he was interrupted. When word spread through town that Bud was shooting pool, people would flock to the pool hall from near and far. Bud was great at mathematics and he used geometry to help him with his game. He enjoyed giving exhibitions at the Veteran's Hospitals and local schools. In addition to his love of pool, Bud enjoyed fishing, hunting, bowling, and visiting with his many friends. Bud was in the Marine Corps from 1942-1946 where he served his country proudly during World War II. He was wounded on Okinawa on April 1, 1945, the only time he was ever in the hospital until his death in 2010. Bud loved Mullens where he spent his entire life, except for his time in the service. He owned and operated the Sportsman Pool Room and Bud and Henry's Grill, a favorite gathering place for many years. Bud never turned away a customer, even if they had no money. He was a great supporter of all Mullens Rebel ball teams and would feed the basketball and football players each week so they could play well. It gave him great pleasure to be involved with generations of Mullens High School athletes. Bud was also instrumental in keeping the Mullens High School Athletic Hall of Fame active because he knew so much about the players and their accomplishments, and he took great pride in recognizing former Mullens athletes. He also gave many moving induction speeches to commemorate the athletes' acceptance into the Mullens Athletic Hall of Fame. Friends may call at the Tankersley Funeral Home from 6:00-9:00 P.M. Friday, January 15, 2010. Services will be 12 Noon, Saturday, January 16, 2010 at the Tankersley Funeral Home Chapel with the Rev. Gilbert Dodson officiating. Burial will follow at Blue Ridge Memorial Gardens, Beckley. Family and friends will serve as pallbearers. In lieu of flowers, donations of sympathy may be made to the Bud Hypes Athletic Scholarship. Please make checks payable to Wyoming East High School, P. O. Box 390, New Richmond, WV, 24867, with the memo stipulating that the donation is for Bud's scholarship.

The family of Buford E. Hypes, Jr. created this Life Tributes page to make it easy to share your memories.