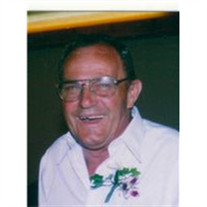 Boyd Hullen Shrewsbury, 74, of Barkers Ridge died Tuesday, October 19, 2010 in a Beckley hospital following a short illness. Born March 29, 1936 at Barkers Ridge, he was the son of the late William Allen and Cora Rose Shrewsbury. Boyd was a... View Obituary & Service Information

The family of Boyd H. Shrewsbury created this Life Tributes page to make it easy to share your memories.