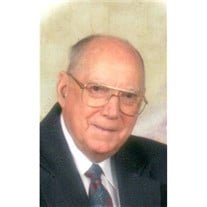 Bishop J.L. Riffe, 84, Of Oceana, WV born June 5, 1931 in Hanover, WV went to be with the Lord surrounded by his loving family at his home on December 5, 2015. He was a Pastor for 58 years, 34 of which was at Mullens Church of God. He had also pastored at Roderfield, Seth, and Oceana Church of God. He was also a member of the Examing Board for the Church of God, member of Mullens Ministerial Association, and served in the United States Army and United States Marine Corps. In his free time he enjoyed playing golf. He was preceded in death by his wife of 59 years, 11 months, 20 days, Addie Paynter Riffe; his parents, Hattie Cook Riffe and Walter Tarvin Riffe, and step-mother, Ida Thornsbury Riffe; brothers, Edgar Riffe and Ernest Riffe, sister, Beatrice Riffe Purdue; and two son-in-laws, Charlie Maynard and Michael Dye. Those left to cherish his memory include his children, Janet Parsons of the home, Dianna Talbert and her husband, Jennings of Oceana, Jeff Riffe and his wife, Kimberly of Beckley, and Sherri Riffe Dye of the home; ten grandchildren, Shawn Parsons and his wife, Becky, Michael Parsons and his wife, Tina, Jennifer Davis, Josh Davis and his wife, Kelsey, Blake Parsons, Alley Talbert, Robert Wyatt, Justin Riffe and his wife, Serena, Jeremy Bailey, and Tiffany Bailey; six great grandchildren, Haleigh and Nathan Pasons, Wesley James Davis, Alyiah Riffe, Skylar Bailey, and Issac Bailey; Mervin and Eppie Riffe family who helped raise him the majority of his life, and countless loving family, friends, and adopted children and grandchildren. Services will be 1:00P.M., Wednesday, December 9, 2015 at the Mullens Church of God, Black Eagle with Bishop Robert Day and Jeff Riffe officiating. Burial will follow in Palm Memorial Gardens, Matheny. Friends may call from 6:00 P.M. to 8:00 P.M. Tuesday, December 8, 2015 at the church and one hour prior to services Wednesday at the church. Military rites will be conducted by the Beckley American Legion Post 32 Honor Guard. Grandsons will serve as pallbearers. Online condolences may be expressed to the family at www.tankerlseyfh.com. The family of Bishop J.L. Riffe is being cared for by Tankersley Funeral Home, Mullens.

The family of Bishop J.L. Riffe created this Life Tributes page to make it easy to share your memories.

Send flowers to the Riffe family.