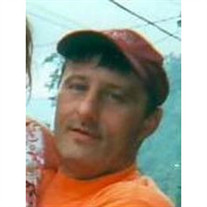 William Milton "Billy" Webb, 44, of Mullens passed away on Saturday, October 29, 2011 at his residence. Born October 9, 1967, he was the son of Judy (Lafferty) Webb of Mullens and the late William W. "Popeye" Webb. Billy was a former coalminer, a welder, and was an avid NASCAR fan with Tony Stewart being his favorite driver. In his leisure he enjoyed hunting, fishing, and especially loved spending time with his grandbabies. At the end of the day when we remember Billy, we will remember him as being respectful, kind hearted, and willing to help anyone even strangers. Billy's personal quote was always "I am only Bill Webb that's all I am, nobody else" He would also say, I am a lucky and blessed man to have the three women in my life referring to his wife, mom, and granddaughter. Those left to cherish his memory include his wife, Geraldine (Ferguson) Webb; two daughters, Magen Ferguson at home and Kendra Ferguson and her companion, Greg Wrenn, of Beckley; three sons, William "Mikey" Thomas of Beckley, Alvis Ferguson and his companion, Tiffany Colbird, of Mullens, and Justin Ferguson and his companion, Stephanie Moore, of Mullens; his mother, Judy Lafferty Webb of Maben; two sisters, Susie Foley and her companion, Garrett Lambert, of Mullens and Denise Cook and her husband, Michael, of Itmann; five grandchildren, Emily Hypes, Cameron Hypes, Eric Hypes, Jeremiah Wrenn, and Braxton Ferguson; a former son-in-law, Kevin Hypes, who Billy thought of as a son; a former brother-in-law, Bill Foley; and nieces and nephews. Services will be 1:00 p.m. Friday, November 4, 2011 at the Tankersley Funeral Home Chapel with Rev. Lewis Arnold and Joey Massey officiating. Burial will follow in Palm Memorial Gardens, Matheny. Friends may call one hour prior to services Friday at the funeral home. Pallbearers will be Shannon Martin, Carl Patterson, Tommy Tilley, Timmy Tilley, Anthony Toler, Shawn Goff, Darnell Allen, Jody Grant, Matt Sims, and Salvatore Turrisi. Everyone who knew Billy loved him and he will be missed by his family and friends.

William Milton "Billy" Webb, 44, of Mullens passed away on Saturday, October 29, 2011 at his residence. Born October 9, 1967, he was the son of Judy (Lafferty) Webb of Mullens and the late William W. "Popeye" Webb. Billy was a former coalminer,... View Obituary & Service Information

The family of Billy Webb created this Life Tributes page to make it easy to share your memories.

William Milton &quot;Billy&quot; Webb, 44, of Mullens passed away on Saturday,...

Send flowers to the Webb family.