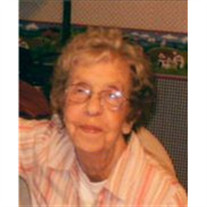 Betty Jane Crotty, 81, of Charleston, formerly of Mullens, passed away Wednesday, December 8, 2010 at Hubbard Hospice House surrounded by her loving family. She was born July 30, 1929 to Henry Asbury Canterbury, Sr. and Barbara Allen Hunter-Canterbury in Pax, WV. Later her family moved to Mullens where she graduated from Mullens High School, Class of 1947, and attended Concord College. She was a member of the Order of the Eastern Star, Chapter #100, and an active member of the Highland Avenue Baptist Church where she taught in the nursery for many years. She was also a very active member of the American Baptist Women. After many years of service, Betty retired from the Wyoming General Hospital. Additionally, as one of the few Republicans in Wyoming County, she was a faithful election poll worker. Betty was also a sports enthusiast, particularly devoted to the Mullens Rebels, Cincinnati Reds, and the WVU Mountaineers. As a true caregiver, Betty especially loved to cook, bake, and care for all of her family and friends. She was a frequent winner at the Mullens Annual Dogwood Festival bake-off and at the WV State Fair. Betty never met a stranger and befriended anyone she ever met. Betty was preceded in death by her parents, her husband of 50 years, Glenn Crotty, Sr., an uncle and aunt, Glenn and Elva Harrah, and a cousin, Barbara Ann Hayes. She is survived by her sons, Dr. Glenn Crotty, Jr. and wife, Kathy, and Charles Richard (Rick) Crotty of Charleston; her daughter, Barbara (Barbie) Marie Covelli and her husband, Dr. Michael Covelli, of Charleston; grandchildren, Dr. Bradley Hunter Crotty of Boston, MA, Brynn Crotty, and Gianna and Jordan Covelli, all of Charleston; brother, Henry Asbury Canterbury, Jr. and his wife, Maude of Mullens; brother-in-law, Gene Crotty and his wife, Cathy, of Mullens; sister-in-law, Betty Sue Crotty of Mullens; nieces, Trudy Blackwell and her husband, Bucky, of Mullens and Tammy McKinney and her husband, Clifford, of Beckley; nephews, Andrew Canterbury of Mullens, Eric Crotty, of Denver, CO and Zina Burks and his wife, Bev, of Princeton. She is also survived by her great nephews, Clint Houck and his wife, Andrea, of Glade Springs and Mark Blackwell of Mullens and great nieces, Kerri Lookabill and husband, Jimmy of Mullens, Amber McKinney of Washington, DC, Erin Crotty and Audra Blackwell, both of Charleston, Blaine McKinney of Morgantown, WV and Mandi Worrell and her husband, Craig, of Cleveland, OH. She is also survived by great-great nephew, Caden Lookabill, of Mullens, and great-great nieces, Sara and Emily Houck of Glade Springs, and Collene Lookabill of Mullens and numerous cousins. The family wishes to thank the staff of CAMC Memorial Hospital and the staff of the Hubbard Hospice House and all the doctors who cared for her. In lieu of other remembrances, donations may be made to the CAMC Foundation's Cancer Fund, 3200 Staunton Avenue, Charleston, WV, 25304 and Kanawha Hospice Care, 1606 Kanawha Blvd., West, Charleston, WV 25312. Services will be 11:00 A.M. Saturday, December 11, 2010 at the Highland Avenue Baptist Church, Mullens with Dr. Phil Smith and Pastor Doug Sandy officiating. Burial will follow in Blue Ridge Memorial Gardens, Beckley. Friends may call from 6:00-9:00 P.M. Friday, December 10, 2010 at the Highland Avenue Baptist Church, Mullens, and one hour prior to services Saturday at the church. Pallbearers will be Andy Canterbury, Bucky Blackwell, Clifford McKinney, Clint Houck, Mark Blackwell, and Zina Burks.

The family of Betty Jane Crotty created this Life Tributes page to make it easy to share your memories.

Send flowers to the Crotty family.