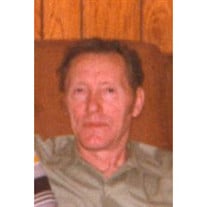 Avery David "Abe" Dunford, 85, of Corinne Bottom, formerly of New Richmond, was called to Heaven on Sunday, March 20, 2011 in a Morgantown hospital following a long illness. Born May 25, 1925 at Itmann, he was the son of the late Robert Lee and Josephine (Pennington) Dunford. Mr. Dunford was a former coal miner with 35 years of service retiring from Consolidated Coal Company at Itmann; was a member of UMWA; for a short time he was a barber at New Richmond; and was Baptist by faith. Mr. Dunford was a veteran of WWII having served in the U.S. Army in the 17th Airborne Division Company H, 194th Glider Infantry. In his leisure he loved to play his guitar and mandolin and loved old country music and bluegrass. In addition to his parents, he was also preceded in death by his wife, Carrie Ellen Dunford, they were married 62 years; a son, David Dunford; two brothers, Albert and Lee Dunford; and a sister, Florence Dunford Green. Those left to cherish his memory include one son, Darrell Dunford and his wife, Bertha, of Corrine Bottom; five grandchildren, David Dunford and his wife, Melissa, of North Carolina, Darren Dunford of New Richmond, Jackie Aurand and her husband, Jay, of Kansas, Vickie Acord and her husband, Larry, of Jesse, and Douglas Shelton and his wife, Judy, of Green Camp; seven great-grandchildren, Dustin Dunford of Beckley, Diedre Aurand of Kansas, Tara Wilson and her husband, Chris, of Fort Hood, Texas, Tanya Cox of Fort Hood, Texas, Quinton Douglas Shelton of Green Camp, Joey Dradenstott and Brandon Massie, both of North Carolina. Services will be 12 Noon Thursday, March 24, 2011 at the Tankersley Funeral Home Chapel with Rev. Larry England officiating. Burial will follow at Sunset Memorial Park, Beckley. Friends may call one hour prior to services Thursday at the funeral home. Family and friends will serve as pallbearers.

Avery David "Abe" Dunford, 85, of Corinne Bottom, formerly of New Richmond, was called to Heaven on Sunday, March 20, 2011 in a Morgantown hospital following a long illness. Born May 25, 1925 at Itmann, he was the son of the late Robert Lee... View Obituary & Service Information

The family of Avery "Abe" Dunford created this Life Tributes page to make it easy to share your memories.

Send flowers to the Dunford family.