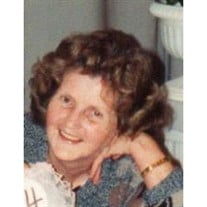 Audrey D. Marcum, 80, of Stephenson went home to be with her Lord on Monday, September 2, 2013 in a Beckley hospital following a long illness. Born April 11, 1933 at Hemphill, WV, she was the daughter of the late Arthur and Willie Bell (Hearl) Duff. Audrey was a graduate of Welch High School and later in Audrey's life she returned to school to complete the LPN program where she was a former employee for Southern Highlands, Mullens and Wyoming Nursing and Rehab Center, New Richmond. She was a 56-year resident of Stephenson, a former treasurer of the Stephenson Burial Fund and was a dedicated member of the Stephenson United Methodist Church where she served in many capacities including Sunday School Teacher and helped with Bible School. In addition to her parents, she is also preceded in death by her husband, Robert A. Marcum, Sr.; a special sister/daughter, Ruth A. Duff; a grandson, Jamie Roop; a daughter-in-law, Felicia A. Marcum; and two brothers, John and Sam Duff. Those left to cherish her memory include a daughter, Carolyn "Susie" Thomas of Stephenson; three sons, Robert "Bobby" Marcum, Jr. and his wife, Linda, of Keyrock, Ira "Link" Marcum and his wife, Etta Brehm, of Mac Arthur, and Roger "Muggs" Marcum, Sr. of Stephenson; grandchildren include, Mr. and Mrs. Chris Marcum and their three children, Jason and Cassy Roop and their children, Jamie, Johannah, and Jackson, Kayla and Kyle Martin and their daughter, Kyleigh, Roger Marcum, Jr., and Jake Martin, seven great grandchildren; three sisters, Bonnie Lester of Hemphill, Betty Evans of Manassas, and Libby Woolridge of Fort Mills, SC; and one brother, Allen Duff, of Martinsville, VA. Services will be 11:00 A.M. Friday, September 6, 2013 at the Tankersley Funeral Home Chapel with Rev. Lewis Arnold officiating. Burial will follow in Blue Ridge Memorial Gardens, Beckley. Friends may call from 6:00 to 8:00 P.M. Thursday at the funeral home. Sons and grandsons will serve as pallbearers. Arrangements have been entrusted to the Tankersley Funeral Home, Mullens. Following the graveside service at the cemetery, there will be a gathering for family and friends at the old Stephenson United Methodist Church.

Audrey D. Marcum, 80, of Stephenson went home to be with her Lord on Monday, September 2, 2013 in a Beckley hospital following a long illness. Born April 11, 1933 at Hemphill, WV, she was the daughter of the late Arthur and Willie Bell (Hearl)... View Obituary & Service Information

The family of Audrey D. Marcum created this Life Tributes page to make it easy to share your memories.

Send flowers to the Marcum family.