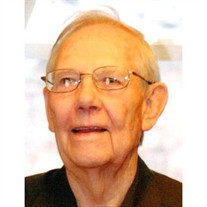 Our beloved Aubrey Clyde Conley, 88, of Amigo, passed away on November 12, 2015. His life was distinguished by love: Love of God, love of family, love of his fellow man and love of God's creatures. Born October 1, 1927, in Narrows, VA., he was the son of Elijah and Mae Gore Conley. He grew up during the Depression and World War II, and he spoke of those experiences for the rest of his life. After graduating from Narrows High School in 1945, he joined the Army. He was part of the U.S. occupation force in Japan and his unit was one of the first admitted into Nagasaki after the atomic bond had been dropped. He was attending Bluefield Business College when he met Rachel Snavely. He said it was love at first sight, and they married in December 1949. The marriage lasted 62 years until she passed away in May 2012. Aubrey was an accountant for coal mines for 40 years. He started in McDowell County and moved to Wyoming County in 1958. He retired from Beckley Mining in Glen Daniel in 1990. He was a devoted care giver to Rachel in her last years. Aubrey enjoyed hunting, fishing, and gardening. In recent times, he liked going to the Dairy Queen, watching baseball and The Waltons on TV and caring for pets. In addition to his wife and parents he was preceded in death by a grandson, Jordan Williams; brothers, Clayton Conley and Robert Conley; sisters, Jessie Nelson and Emma Lester. Those left to treasure his memory include four devoted children, Patsy Parker and her husband, Dale of Proctorville, Ohio; Susan Conley and her husband, John Williams of Raleigh, NC; Roger Conley and his wife, Kathy of Stephenson; and John Conley of Amigo; six grandchildren, Bret Parker and his wife Sue of Burlington, NC; Ashley Elam and her fiancé Elbert Davis of Crown City, Ohio; Rev. Tyler Williams of Sanford, NC; Tanner Williams of Raleigh, NC; Justin Conley of Amigo; and Andrea Smith of Albuquerque, NM; four beloved great grandchildren, Annika and Aracoma of Crown City Ohio and James and Charlie of Albuquerque; and his sister, Lucy Campbell of Narrows, VA. The family expresses thanks to Dr. E.J. Salon and his staff for decades of care, to the Wyoming County Council on Aging and to nurses from PCH. Services will be held 12 Noon, November 16, 2015 at the chapel of Tankersley Funeral Home in Mullens with Rev. Richard Chester and Rev. Earle Arthur officiating. Friends may visit one hour prior to service. Aubrey will be laid to rest at Roselawn Memorial Gardens, Princeton. Online condolences may be expressed to the family at www.tankersleyfh.com The family of Aubrey Conley is being cared for by Tankersley Funeral Home, Mullens.

Our beloved Aubrey Clyde Conley, 88, of Amigo, passed away on November 12, 2015. His life was distinguished by love: Love of God, love of family, love of his fellow man and love of God's creatures. Born October 1, 1927, in Narrows, VA., he... View Obituary & Service Information

The family of Aubrey C. Conley created this Life Tributes page to make it easy to share your memories.

Our beloved Aubrey Clyde Conley, 88, of Amigo, passed away on...

Send flowers to the Conley family.