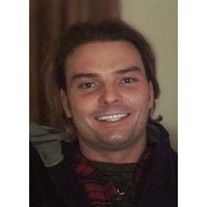 Ashley Orlan McNeely died May 2, 2017 in his home in Beckley, WV. Ashley was born November 5, 1981 the cherished son of Orlan (Butch) McNeely, Jr. and Robin McKinney McNeely. He was preceded in death by his grandparents, Orlan and Eva Bowyer McNeely, his grandfather, Hubert McKinney, and a special Uncle, Corky Shumate, and special Aunt, Elaine McNeely Shamblen and extended members of the Robert McCall and Hubert McKinney families. He is survived by his parents and his sister, Angela Hope McNeely of Charleston, WV, his grandmother, Imogene "Sissy" McKinney of Mullens, WV, his Aunt and Uncle Teresa and David Jordan of West Columbia, SC, and his Aunt Drema "Pudgy" Shumate of Otsego, WV. Ashley was the beloved cousin of Kelly Shumate (Rebecca), Casey Shumate Parr (Marty), Allison Jordan Merchant (Lew), Adam McNeely Jordan (Laura), Constance Shamblen and Stacy Shamblen Dilzer. He was loved and idolized by his younger second cousins, Brigitte Dunsire, Ross Dunsire, Max and Dexter Dilzer, Corey and McKenzie Shumate, Kennedy and Rayne Parr, Tradd, Abigail and Taylor Merchant, and, Emily Kate and Annalee Jordan. He was their living Super Hero! They knew they would be in for adventure with Ashley! They leave this statement, "We didn't realize we were making memories, we just thought we were having fun." Winnie the Pooh. Ashley was a well known, gifted and accomplished athlete. He was a 2001 graduate of Wyoming East High School and the recipient of the Sam Huff Award for West Virginia High School Defensive Player of the Year. He was a 2006 graduate of Marshall University where he lettered in football. Ashley's athletic prowess was unsurpassed. He was the National Regional Golden Gloves Boxing Champion at the age of 15. He later participated the Mixed Martial Arts and, along with his father, he served as a boxing referee for the WV Athletic Commission. Also, he played for the WV Storm football team. Ashley served his community of Mullens, and surrounding communities, by assisting with the various youth sporting events. He loved working with the younger athletes. He was a ski instructor at the Winter Place Ski Resort where his greatest joy came from teaching the physically handicapped. He also worked as a substitute teacher and enjoyed volunteering for Habitat for Humanity in Huntington. Ashley also participated in the entertainment industry. He had a role on the MTV Reality Shows, A Shot of Love, and That's Amore'. He had a bit part in the movie, We Are Marshall, with Matthew McConaughey and helped Ryan Seacrest and Kid Rock drop the New Year's Ball in New York City. Ashley was a free spirit and a daunting force when facing any athletic challenge. He was a walking logo for "NO FEAR." With his Dad, Sister, friends and relatives, he pursued many challenges. He was fun, humble, generous and compassionate. And, to everyone's delight, he was a reckless and adventurous soul. He packed a lifetime of adventures into 35 years. A celebration and a time of sharing memories in memory of Ashley will be held from 6:00 P.M. to 8:00 P.M. on Monday, May 15, 2017 at the American Legion Building, Mullens. The family requests that if you would like to share a memory, you can do so at this time. The family also requests that this is a informal celebration and dress either in tie-dye or bright colors in memory of Ashley. In keeping with Ashley's wishes, his body has been cremated. The family requests donations of sympathy be made in Ashley's memory to the City Of Mullens Foundation, P.O. Box 266, Mullens, WV 25882 to help further improvements to playgrounds, swimming pools, and other projects around town to benefit the children of Mullen's. Online condolences may be expressed to the family at www.tankersleyfh.com. The family of Ashley McNeely is being cared for by Tankersley Funeral Home, Mullens.

Ashley Orlan McNeely died May 2, 2017 in his home in Beckley, WV. Ashley was born November 5, 1981 the cherished son of Orlan (Butch) McNeely, Jr. and Robin McKinney McNeely. He was preceded in death by his grandparents, Orlan and Eva Bowyer... View Obituary & Service Information

The family of Ashley O. McNeely created this Life Tributes page to make it easy to share your memories.

Send flowers to the McNeely family.