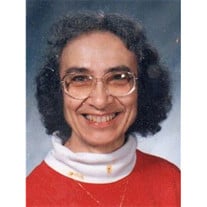 Ann Gorham (Dodge) Pollock, 75, of Mullens ended her 20 year battle with Alzheimer's on Wednesday, April 9, 2014 at Wyoming Nursing and Rehab Center and began to truly live for the first time in the light of the Glory of the Lord. Born August 15, 1938 at Long Island, NY, she was the daughter of the late Edward N. and Kathryn Mildred (Hance) Dodge. In addition to her parents she is also preceded in death by several aunts and uncles. Ann was a graduate of Dumont High School in New Jersey and Sherwood School of Music in New York. After high school she attended Moody Bible Institute and was an accomplished pianist and organist. While at Moody she met the love of her life, David G. Pollock. She and David ministered together for 55 years in Southern West Virginia and in various other places throughout the Eastern United States. They served several years at the Otsego Bible Chapel and were currently serving in their 53rd year at Welton Bible Chapel. Ann was a former music teacher, a 30 year employee of the Wyoming County Board of Education retiring as a Kindergarten Aide at Mullens Elementary School. Ann was a devoted daughter, wife, mother, and grandmother. Those left to cherish her memory include her loving and devoted husband of 55 years, David G. Pollock; son, David G. Pollock, Jr. and his wife, Lynn of Portland, Oregon; two daughters, Debby K. Edwards and her husband, Mike of Knoxville, TN and Chris R. Hedrick and her husband, Doug of Mullens; nine grandchildren and nine great grandchildren. Services will be 12 Noon, Saturday, April 12, 2014 at Welton Bible Chapel, Allen Junction with Charles A. Pollock and Dr. Jerry Dixon officiating. Burial will follow in Hilltop Cemetery, Hinton. Friends may call from 6:00 P.M. to 9:00 P.M. today at the church and one hour prior to services Saturday at the church. Men of the Welton Bible Chapel will serve as pallbearers. Donations of sympathy may be made to Wyoming Nursing and Rehab Center Resident Council or Activities Department P.O. Box 149 New Richmond, WV 24867. The family would like to give a heartfelt thanks to the staff of Wyoming Nursing and Rehab for their compassion and care shown to Ann these past 2 1/2 years. Online condolences may be expressed to the family at www.tankerlseyfh.com. The family of Ann Pollock is being cared for by Tankersley Funeral Home, Mullens.

Ann Gorham (Dodge) Pollock, 75, of Mullens ended her 20 year battle with Alzheimer's on Wednesday, April 9, 2014 at Wyoming Nursing and Rehab Center and began to truly live for the first time in the light of the Glory of the Lord. Born August... View Obituary & Service Information

The family of Ann G. Pollock created this Life Tributes page to make it easy to share your memories.

Send flowers to the Pollock family.