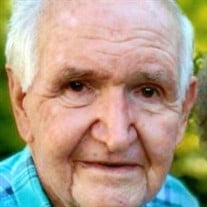 Andrew Jackson Wallen, Jr., 83, of Mullens entered Heaven at Princeton Community Hospital on December 30, 2020. Born May 13, 1937 in Helen, he was the son of the late Andrew Jackson Wallen, Sr. and Edna Louise Arnold Wallen. Jack was a 1955 graduate of Stoco High School, was a devout Christian, and a member of the Mullens United Methodist Church. He was an employee of Sears for 31 years, working in Mullens and Beckley. In his leisure he loved to play games and work puzzles with his wife, children, and grandchildren. He was truly a family man. In addition to his parents, he is also preceded in death by his sisters, Anita Louise and Sandra Humphrey; his special little brother-in-law, Larry. Those left to cherish his memory include his wife of 63 years, Deloris Gail Cook Wallen; two sons, Andy and his wife, Cindy of Moravian Falls, NC and Brian of Pittsboro, NC; one daughter, Cheryl Wilson of Sophia; grandchildren, Jackson Wallen of Eureka, CA, Katie and Phillip Ryser, Zack, Dylan, and Lucas of Siler City, NC, Chris Wilson and his wife, Rachel of Hillard, OH, and Corey Wilson and his wife, Rory of Versailles, PA; great grandchildren, Ava and Kaden of Eureka, CA; sisters, Rita Porter of Lemon Grove, CA and Kay King and her husband, Pate of Mullens; brothers, Harold Wallen and his wife, Julia of Plainfield, IN and Ricky Wallen and his wife, Terri of Clover, SC. A private family service will be held. In lieu of flowers, donations of sympathy may be made to the Mullens United Methodist Church Online condolences may be expressed to the family at www.tankersleyfh.com The family of Jack Wallen is being cared for by Tankersley Funeral Home, Mullens.

The family of Andrew Jackson Wallen Jr. created this Life Tributes page to make it easy to share your memories.

Send flowers to the Wallen family.