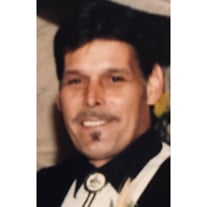 Allen "Doc" Anthony Murdock, 64, of Fayetteville formerly of Amigo, took the heavenly country roads home on April 15, 2019 at Bowers Hospice House after an intense battle with Black Lung. Allen was a dedicated member of the UMWA for 32 years in Southern West Virginia.  Rebecca and Allen were raised together in Amigo bottom from their youth.  Kismet brought them back together as adults when they got married in their mid-life.  Aside from his love of mining coal, he was a seasoned musician.  His brothers and sisters travelled singing gospel music and making memories during his youth.  Allen was famous for his quick witted jokes and contagious laugh. Allen was born on December 3rd, 1954 in Mullens, WV and was the son of the late Clifton and Millie (Kershner) Murdock. In addition to his parents, he is also preceded in death by his niece, Twila Lilly and nephew, Doug Murdock. Those left to cherish his memory include wife of 17 years, Rebecca Murdock; his daughter Alicia Trump and boyfriend, Don Martin; stepchildren, Amanda Steele husband, David and William Garretson Jr. and his wife, Leslie; his grandbabies, Rowan, David, and Remee Steele; Alma Lilly and her husband, Roger, Jessie Adams, James Murdock and his wife, Vera, Randy Murdock and his wife, Donna, Karen Birdsong and her husband, Chuck, Pam Lambert, Patricia Sturgill and her husband, Charlie, and Melissa Shrewsbury and her husband, Tim. Services will be 7:00 P.M. Friday, April 19, 2019 at Tankersley Funeral Home Chapel with Reverend Dean Adams officiating. Friends may call one hour prior to services Friday at the funeral home. Online condolences may be expressed to the family at www.tankersleyfh.com. The family of Allen Murdock is being cared for by Tankersley Funeral Home, Mullens.

Allen "Doc" Anthony Murdock, 64, of Fayetteville formerly of Amigo, took the heavenly country roads home on April 15, 2019 at Bowers Hospice House after an intense battle with Black Lung. Allen was a dedicated member of the UMWA for 32 years... View Obituary & Service Information

The family of Allen "Doc" Murdock created this Life Tributes page to make it easy to share your memories.

Send flowers to the Murdock family.