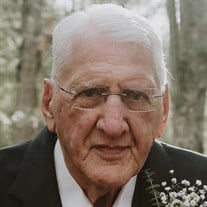 Our beloved Adolph went to be with the Lord on Friday, April 16, 2021 at the age of 88. Born in Wyco, West Virginia on July 10, 1932, Adolph will be forever missed by so many. He was a loving husband, father, grandfather, great-grandfather, and friend. He is preceded in death by his wife, Peggy; his parents, Rudolph and Mary Pedri; sisters, Rena Wilcox, Emma Pedri, and Josephina Pedri; and a daughter-in-law, Tammy Pedri. Adolph was drafted in the Army in the 1950s and served two years in the Korean War. Upon returning from war, he worked in the coal mines. For many years following, he drove a school bus for the Wyoming County Board of Education and served the county until his retirement. He was part owner of the Dairy Queen for a short while and owned a taxi cab stand in Mullens. He also worked seasonally for the park service leading teens on grounds and facility improvements for Twin Falls State Park. Adolph was such a giving person. He never met a stranger. He read his Bible every morning. He loved sports and would talk hours with anyone about any and all sports. He loved to watch his children, grandchildren, and great grandchildren play any sport from dance to football. He loved his family most of all. Those left to cherish his memory are his daughter, Gina Martine and her husband, Albert "Al" Martine, III of Daniels; two sons, Mark Pedri of Rock Hill, SC and Michial Pedri and his wife, Donna of Cool Ridge; grandchildren, Leslie Buzzo, Ashley Clark, Albert "Al" Martine, IV, Christian Martine, Emma Pedri, and Ella Pedri; great grandchildren, Dylan Brehm, Autumn Clark, Eli Clark, Albert "Albie" Martine, V, Harper Viers, Ian Vanover, and Lillee Vanover, along with many cousins and friends. Graveside service and entombment will be 1:00 P.M. Wednesday, April 21, 2021 at Blue Ridge Memorial Gardens Mausoleum, Beckley. Friends may call from 10:00 AM to 11:00 A.M. Wednesday at the funeral home. Family and friends will serve as pallbearers. Those wishing to attend the services, CDC guidelines will be followed, social distancing is required, and masks are mandatory. Online condolences may be expressed to the family at www.tankersleyfh.com The family of Adolph Pedri is being cared for by Tankersley Funeral Home, Mullens.

Our beloved Adolph went to be with the Lord on Friday, April 16, 2021 at the age of 88. Born in Wyco, West Virginia on July 10, 1932, Adolph will be forever missed by so many. He was a loving husband, father, grandfather, great-grandfather,... View Obituary & Service Information

The family of Adolph Pedri created this Life Tributes page to make it easy to share your memories.

Our beloved Adolph went to be with the Lord on Friday, April...

Send flowers to the Pedri family.