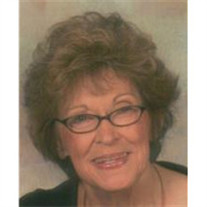 Addie Riffe, 75, of Oceana went home to be with the Lord surrounded by her family when her angels came to take her home on Monday morning April 22, 2013 following a long courageous battle with multiple myeloma. Born April 27, 1937 at... View Obituary & Service Information

The family of Addie Riffe created this Life Tributes page to make it easy to share your memories.

Addie Riffe, 75, of Oceana went home to be with the Lord surrounded...

Send flowers to the Riffe family.